Use Cases for Data Science at Academic Health Science Centers

Like many academic health science centers, my institution is undergoing a planning process to determine our strategy for data science. I have expressed my concern about the (lack of?) differences between data science and biomedical and health informatics, but the former term seems to be carrying the day. I consider it a personal mission to ensure that the long learned history of biomedical and health informatics is not lost in our rush to embrace this seemingly new data science.

One of my major contributions to our process has been to delineate a set of use cases for data science in academic health science centers. These institutions are distinct from organizations that are predominantly devoted to healthcare delivery, and tend to have small or non-existent research and education missions, and general universities, which may not have healthcare delivery activities integrated with their research and educational missions.

Data science is indeed unique in academic health science centers. These use cases demonstrate how it spans across all of their missions. The success of initiatives such as ours are likely to depend upon the integration all of three.

One of my teachable moments in information retrieval (IR) is about uncommon words tending to be the most discriminating and leading to the best results in searching. I am hardly the first person to come up with this idea, as IR research pioneer Gerald Salton demonstrated its value and published about it in the 1970s [1]. I do, however, provide a modern example of it, which is demonstrated by searching (or Googling) on my name. My last name, in particular, is spelled in a somewhat unusual manner, as most people spell it Hirsh, Hersch, or Hirsch. Combined with my presence on the Web, with many links to my major pages (another teachable moment about the Google PageRank algorithm [2]!), I have never had to pay anyone for search engine optimization (SEO), and Googling “Bill Hersh” or “William Hersh” lists most of my key pages right at the top of the search output.

Early in the days of Google, I discovered another William Hersh, who was also in academia. I also noted him in PubMed (MEDLINE) author searches on our name (hersh w). I knew he was a Chemistry professor at Queens College in New York. Apparently over this nearly two decades, he knew of me as well. We both contemplated reaching out to each other, but neither of us ever did.

About a month ago, I received an email from a colleague of his at Queens College that was sent to my Gmail account by mistake. I replied to the email, telling the sender it was sent to me in error and probably meant for his co-worker. He sent my message to Bill, who reached out to me to apologize for the error. This started a conversation, with each of us describing how long we knew about each other. (He was even once invited to serve on an NIH review panel when they thought they were inviting me!). He also told me that a former student of his from years ago, upon finding me, told him that “that my googleganger is my doppelgänger.” (I have to admit I had to go Google the word doppelgänger to be certain of its meaning.)

We both noted we were academic graybeards, and after some discussion found out that our grandfathers emigrated from different cities in Poland (his Czestochowa and mine Lodz). In addition, like many people with last name Hersh, our grandfathers Anglicized their last names from Hershkowitz. They also both experienced anti-semitism in Eastern Europe, part of their motivation for emigrating to the US.

I also told Bill that I was going to be in New York City in late October, and we set a day and time to meet for lunch. We had that meeting yesterday, and it was enjoyable to trade stories of our somewhat common ancestry, our careers, and our families. My family got a kick out of my telling them that Bill too drives a Toyota Prius. Here is a picture of us together: 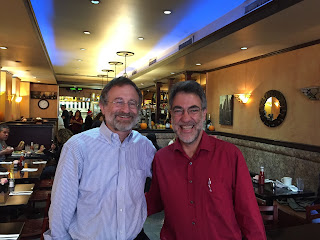 It was indeed fun to find Bill, meet him, and reflect on how our meeting was made possible by the Web and IR (my field of research). I do hope to keep in touch with him and meet him again.

A Huge Week for Health IT/Informatics

This past week was a busy week in the health IT/informatics world, as the US government released a flurry of rules and documents around health IT. As I tell my students, it is great to be living in this ever-changing part of the history of our field.

Probably making the most news was the release of the rules for Stage 3 of the EHR Incentive (also known as "Meaningful Use") Program by the Centers for Medicare & Medicaid Services (CMS). The Meaningful Use Program has taken its share of lumps in the last year or two, with the challenges providers have had in meeting its Stage 2 criteria and how it has consumed bandwidth that might be put toward other innovation by the healthcare system as well as the vendors. CMS has seem to have gotten the message somewhat, and the new criteria do dial back some on the requirements.

With the new rule, Stage 2 will be modified significantly. Some acute relief will be provided in the form of reduced requirements, from the necessity of reporting only 90 days (as opposed to a full year) of annual reporting to modification of the "view, download, and transmit" (VDT) requirement from five percent of an EP's patient panel to one single patient and reducing the secure messaging requirement from five percent to just being required to have the capability.

Also changed in Stage 2 itself, now called Modified Stage 2, which will be in effect from 2015-2017. The number of objectives is reduced to ten for eligible professionals (EPs) and nine for eligible hospitals (EHs), with each having one or more measures. The objectives are:
Starting in 2018, Stage 3 will become active, with the same objectives as above but with some more rigorous criteria for some of the measures. There is, however, one qualification to Stage 3, which is the opening of a comment period for how it could be changed to align with the new value-based care rules for Medicare. With the addition of calls for Stage 3 to be delayed or outright abandoned, it is not clear what it will ultimately look like.

The full rule is available, as is a brief summary. As always, my preference is for a detailed overview that provides enough detail for the informed reader, somewhere in between the minimally informative short summary and the exhaustive detail of the entire review, which CMS has also provided. (Note to standards developers! I prefer this approach for documentation of standards as well, eschewing both the superficial overviews as well as hundreds-of-pages implementation guides.)

The week’s activities did not, however, stop with release of the meaningful use and certification rules. ONC also released a final version of its Federal Health IT Strategic Plan for 2015-2020.
The stated mission of the plan is to "improve the health and well-being of individuals and communities through the use of technology and health information that is accessible when and where it matters most.” This will be achieved through four goals:
One of the objectives of the fourth goal is to implement the Shared Nationwide Interoperability Roadmap, which was also released by ONC this week in its final Version 1.0 form. The roadmap was accompanied by an updated version of ONC's 2016 Interoperability Standards Advisory, which provides an exhaustive list of the best available standards and links to their implementation specifications. These releases were described in a blog post by ONC Director, Dr. Karen DeSalvo.

As if this week’s activities were not enough, last week was another major milestone, with the switchover to ICD-10-CM by hospitals physician offices, and others who bill in the healthcare system. Eerily similar to Y2K a decade and a half ago, there were very few reports of problems, presumably because the community was well-prepared. Of course, only time will tell, particularly if providers start having claims denied because of faulty coding.

Another recent event pertinent to all of the above occurred the week before, when I presented the inaugural Clinical Informatics Grand Rounds at OHSU. The Grand Rounds series will be part of our normal Thursday Conference Series, and I usually kick off the series each academic year. This year I chose to talk on the topic, HITECH and Meaningful Use: Results from the Grand Experiment and Future Directions. My talk (video and slides available) was built around a proclamation I made in this blog on January 24, 2010, in a posting entitled, Informatics Now Lives in a HITECH World:
"This is a defining moment for the informatics field. Never before has such money and attention been lavished on it. HITECH provides a clear challenge for the field to 'get it right. It will be interesting to look back on this time in the years ahead and see what worked and did not work. Whatever does happen, it is clear that informatics lives in a HITECH world now." Going forward, it will continue to be interesting to pause and reflect.

As regular readers of this blog know, I periodically devote postings in this blog to accolades, usually for myself but sometimes for others. I would like to devote this posting to accolades for the many students and faculty in the Oregon Health & Science University (OHSU) Department of Medical Informatics & Clinical Epidemiology (DMICE). More details are provided in the recently published edition of our department newsletter. (Past newsletters are also available.

There are many accolades to point out in the newsletter (starting on page in parentheses):
One final accolade is particularly noteworthy to call out. We were recently informed that OHSU informatics students will be finalists in the 2015 AMIA Student Design Challenge. The theme of this year’s competition is, The Human Side of Big Data – Facilitating Human-Data Interaction. A number of student groups from around the country submitted entries to the competition, and four finalists were recently selected to present at the AMIA Annual Symposium in November. Two of those finalist groups consist of OHSU students:
I am delighted that our students were successful enough to get this far, and I hope that one of them emerges as the winner, as a group of OHSU informatics students did in last year’s event.

Posted by William Hersh, MD at 2:56 PM No comments: