Predatory Journals and Conferences Preying on a New Researcher

I had an interesting interaction from two parts of my life recently. One part emanated from my work as an informatics and information retrieval researcher, with interests that include the potential for the Internet to increasingly facilitate "open science," in which the methods, results, data, and generated knowledge are all more widely transparent and disseminated. An important part of open science is open-access publishing, an approach to publishing that changes its model to one where the research pays (usually through the grants that support their work) for the cost of publishing, and the resulting paper is made freely available on the Internet.

Unfortunately, there is a down side to open-access publishing, which is the proliferation of so-called predatory journals and conferences. These publications and events typically claim to be prestigious and offer peer review, but in reality they exist mainly to make money by trading on researchers’ need to publish and present their work [1, 2]. In reality, these venues have little if any peer review, as exemplified by cases of scientists submitting obviously bogus research that nonetheless is accepted for publication [3]. One Web site maintains a list of such journals. Another covers the topic exhaustively in the context of scientific fraud and misconduct.

This does not mean that all open-access journals have poor peer review (case in point are the Public Library of Science - PLoS and Biomedical Central - BMC journals). Nor does it mean that plenty of poor science does not make it through peer review in journals from traditional publishers. However, there is probably additional vigilance required when it comes to open-access journals. One cut point for journals I advise for students and others in biomedical sciences whom I mentor is it being included in the MEDLINE database, which has a threshold of peer review and other attributes that journals must reach to be listed (PLoS and BMC journals are in MEDLINE).

The part of my life that this story interacted with is the early research career of my daughter, an MD/MPH student at Oregon Health & Science University (OHSU), who recently had her first journal paper publication, on the heels of a number of poster abstract presentations [4]. Yes, I am a proud father!

But no sooner than her journal paper had been accepted and the ahead-of-print version posted, she started receiving the kinds of emails most of us in research receive on a daily basis, inviting submissions to predatory journals and presentations to similar conferences. She was excited to be invited to an international conference; I had to disappoint her to note the nature of such conferences (and that she would need to pay her way).

This episode shone a new light for me on the daily stream of nuisance emails from predatory journals and conferences that I receive. (One characteristic of these emails that helps me identify them as predatory is that they do not offer, as required under the US CAN-SPAM Act, an option to unsubscribe.) It annoys me that young researchers get exposed to this sort of thing at a more impressionable stage of their careers.

On a related note, now that she is published, my daughter’s next milestone will be to get her first citation, which will of course give her an h-index of 1. I had a tongue-in-cheek discussion with some of my geeky research colleagues as to if I cited her paper, whether it would be a form of scientific nepotism (a teachable moment about the h-index and citations!). However, I am certain she will receive many more legitimate citations as her career develops, so I will let her career grow without any intervention on my part, other than being a supportive parent.

The EHR Strikes Back!

The last few years have been challenging for the electronic health record (EHR). While the Health Information Technology for Economic and Clinical Health (HITECH) Act succeeded in transitioning the US healthcare system mostly away from paper [1], the resulting electronic systems created a number of new problems [2]. They include diverting attention from patient care, adding to clinician time burdens, and causing outright burnout. Although the underlying problems of quality, safety, and cost of healthcare motivating the use of EHRs still exist, the large-scale adoption of EHRs has yet to solve them in any meaningful way.

I cannot imagine that many would advocate actually returning to paper medical records and fax-based communications. But clearly the new problems introduced by EHRs must be addressed while not losing sight of the original motivations for them. Fortunately, a more nuanced view of the EHR is emerging, and based on some recent happenings I will describe next, it may be said that the EHR is striking back.

The first strike back was an "Ideas and Opinion" piece in the medical journal, Annals of Internal Medicine. Presenting data on note length in the EHR gathered by use of the Epic EHR in different countries, Downing et al. found that the length of notes in the US was substantially longer than those in other countries [3]. The authors contend that this is due the priority of EHR use in the US for billing and other non-direct aspects of clinical care. They suggest that these uses beyond the direct clinical encounter, and not the EHR itself, are the cause for physician dissatisfaction and burnout.

A second strike back is the release of a Harris poll at a Stanford symposium to re-imagine the EHR and make it more useful for physicians. The poll of over 500 primary-care physicians (PCPs) on the EHR showed that these physicians saw value in the EHR but that they also desired substantial improvements.

About two-thirds of these physicians agreed with the statement that EHRs have led to improvement in care (63%) and were somewhat or more satisfied with their current systems (66%). But significant numbers of these PCPs also acknowledged problems:
The surveyed PCPs did not see EHRs as powerful clinical tools, but rather found their primary value in data storage (44%), with only 8% agreeing their primary value was clinically related.

Their survey also found substantial agreement on what should be fixed immediately versus in the longer term:
A final strike back for the EHR is the announcement by Apple of their new Healthkit, a collection of application programming interfaces (APIs) that add value to the functionality recently added to the Apple Health app that allows people to download their data via the Fast Healthcare Interoperability Resources (FHIR) standard. These APIs will allow new apps to be developed that implement ways to use their data to improve their health and healthcare. Apple has historically been a company that has tended to isolate its ecosystem and has been slow to adopt standards, but this move into the most important data standard for healthcare is to be lauded. The present functionality of being able to download data into the Apple Health app is limited, but the functionality of downloading it with FHIR and providing an API for use of the data opens to door to many applications, some of which no one has even conceptualized.

The EHR has certainly taken it on the chin of late, deservedly so. But with the foundation that has been laid by HITECH, recognition of the problems being more related to the healthcare system than the EHR per se, and new innovations such as those from Apple and others who devise new methods to do interesting things with the data, we will hopefully find new innovations that address problems in healthcare and enable new applications that improve personal and public health.

Posted by William Hersh, MD at 9:10 AM No comments:

I am pleased to announce that I am Co-Editor of the newly published, Health Informatics: Practical Guide, Seventh Edition. The original editor, Robert Hoyt, MD, asked me to come on as Co-Editor for this edition. I will assume sole editorship starting with the Eighth Edition. Although Bob and his wife Ann Yoshihashi deserve credit for the lion’s share of the painstaking details that books like this require, I am pleased to note that I was also involved in the authorship of eight of the book’s 22 chapters.

Bob and Ann have always used an interesting approach to publishing that has arisen in the Internet era, which is so-called self-publishing. They have used the site Lulu.com, which features print-on-demand as well as electronic versions. Although I mostly prefer electronic books these days, the first picture below shows the smiling Co-Editor with his first paper copy. The second picture below shows the back cover that lists the table of contents of the book. 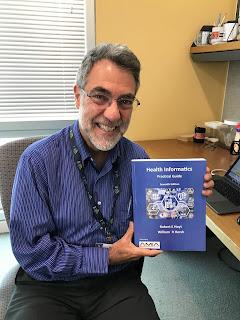 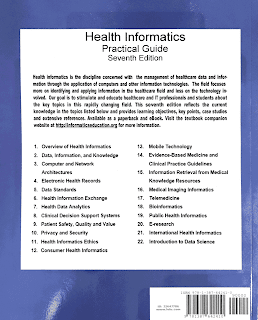 The book is available for purchase on the Lulu.com Web site in both print and eBook PDF formats. The book will also be made available from the more “traditional” online booksellers, such as Amazon.com. Bob also maintains a Web site for the book that includes a special area for those who use the book as instructors (and can register for a free evaluation copy).

The content of the new book is well-aligned with the well-known introductory biomedical and health informatics course that I teach, which is variably called 10x10 (“ten by ten,” the standalone version) and BMI 510 (one of the initial courses in our graduate program).

The chapters I authored or co-authored include:

I look forward to getting feedback on the book and suggestions for improvement, especially for the next edition.
Posted by William Hersh, MD at 4:39 PM No comments: