For the last couple years, faculty from the Oregon Health & Science University (OHSU) Department of Medical Informatics & Clinical Epidemiology (DMICE) and Library have been developing open educational resources (OERs) in the area of Biomedical Big Data Science. Funded by a grant from the National Institutes of Health (NIH) Big Data to Knowledge (BD2K) Program, OERs have been produced that can be downloaded, used, and repurposed for a variety of educational audiences by both learners and educators.

Development of the OERs is an ongoing process, but we have reached the point where a critical mass of the content is being made available for use and to obtain feedback. The image below shows the home page for the Web site. 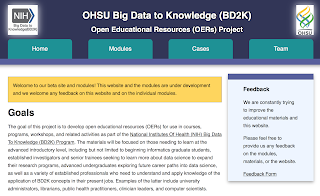 The OERs are intended to be flexible and customizable and we encourage others to use or repurpose these materials for training, workshops and professional development or for dissemination to instructors in various fields. They can be used as "out of the box" courses for students, or as materials for educators to use in courses, training programs, and other learning activities. We ultimately aim to create 32 modules on the following topics:
At the present time, 20 of the above modules are available for download and use. We are encouraging their use and seeking feedback from those who make use of them. The feedback will be used to improve the available modules and guide development of those not yet released.

We have also been developing mappings to research competencies in other areas, such as for the NIH Clinical and Translational Science Award (CTSA) consortium research competency requirements and the Medical Library Association professional competencies for health sciences librarians. To this end, we have been able to link these materials to existing efforts, and provide training opportunities for learners and educators working in these areas. We ultimately aim to complete this mapping across all of the BD2K training offerings, to align with other groups, avoid redundancy and to ensure we are meeting the needs of these various groups.

This project is actually one of several projects that have been funded by grants to develop and provide education in biomedical informatics and data science. The other projects include:
We hope that all of these materials are useful for many audiences and look forward to feedback enabling their improvement.

What Should Be The Spectrum of Career Opportunities for Clinical Informatics Subspecialists?

A common reason given for the establishment of clinical informatics as a physician subspecialty is the recognition of the growing role of physicians who work in informatics professionally, particularly in operational clinical settings. Sometimes this is viewed almost synonymous with the Chief Medical Informatics Officer (CMIO) and related roles in healthcare provider organizations.

However, I prefer to think of the subspecialty more broadly. Even if the CMIO is the most common or aspired to position for clinical informatics subspecialists, we should still consider other career paths, especially for those who will increasingly be trained in formal fellowships. Just as physicians of other specialties may enter private practice, managed care settings, academia, and even industry, so should we view the breadth of options for those trained in clinical informatics. I certainly hope there will be pathways from clinical fellowships into academic careers for these physicians.

I was recently involved in a discussion on an email list where many CMIOs lamented that many of the questions on the clinical informatics subspecialty board exam did not seem pertinent to their day-to-role as CMIOs. That led me to raise the question, do we view this subspecialty as primarily focused on the CMIO role, or should it cover broader aspects of clinical informatics? Not being a CMIO, and being in academia, my sentiments are with the broader view. But on the other hand, as the CMIO is a prominent position for those working in this field, and perhaps the most common one, it does deserve important consideration.

This discussion is highly relevant to those of us standing up ACGME-accredited clinical informatics fellowships. We certainly want our fellows to gain substantial operational experience. But I would advocate that they also learn the fundamentals of the informatics field, and believe that although a little dated since its creation in 2009, the Core Content outline covers it pretty well.

Just as while most physicians in a specialty (e.g., internal medicine) do not use the entire spectrum of knowledge in their fields on a daily basis, I believe our clinical informatics fellowships should take the same approach and that the board exam should reflect comparable breadth. I do not believe there is anything in the Core Content outline that is completely superfluous to the practice of being a CMIO or other jobs applying clinical informatics.

The challenge, then, is how to create a fellowship program and board exam to reflect the broader field. Informatics has always had (and I am a product of) the research-oriented NLM fellowships. Even though focused on research, these fellowships have produced diverse outcomes, including some CMIOs. While the focus on clinical fellowships is somewhat different, there should be no reason why graduates of these fellowships should not be able to pursue careers in academia, research, industry, and other settings.
Posted by William Hersh, MD at 3:59 PM 1 comment:

When the original Apple Watch came out, it was a non-starter for me. As one of my main uses of a smartwatch is for running, i.e., to track my runs and view them on a map, the lack of on-board GPS meant that the watch had to be tethered to an iPhone. While I do sometimes run with my iPhone, I might as well carry just my iPhone. In addition, I sometimes run in places where I am not able to use my iPhone, such as countries that do not have international data plans with my carrier, Verizon (admittedly increasingly rare).

I was therefore thrilled to read the announcement of the Apple Watch Series 2, which would have standalone GPS and enable me to track runs without a phone.

I have been using my Apple Watch Series 2 for about a month now, and have some observations and hopes for improvement. If those improvements are made soon, I will add a postscript to this posting.

From a hardware standpoint, the watch is excellent. It is comfortable to wear and works seamlessly with my iPhone 6 (soon to be replaced with a 7 Plus). I have always able to make it through a day (even with a run that consumes 20-30% of the battery life per hour of activity) without having to recharge it.

In addition to capturing my runs, I want to be able to view them on any device, including on a computer via a Web site, and also share them on Facebook. I want to be able to view all of the data, including the map of where I have run, as well as export it via standard formats such as GPX and TCX. For years I have used various Garmin fitness watches, and I appreciated the ease by which I could capture my run, display its data and map on the Garmin Connect Web site, and share it to Facebook and other digital places.

In terms of capturing the run, the Apple Watch Series 2 does great. I am actually impressed at how quickly it locks on the GPS satellites, and the accuracy seems to be equal to my previous Garmin watches. 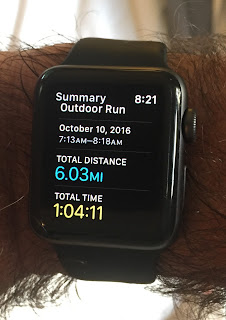 But I have disappointment in its ability to export or display of data. While the watch’s Workout app is simple and easy to use, and the Activity app on my iPhone easy to use and display results, the data cannot be exported to other apps. I am also disappointed that the Activity app only runs on the iPhone, and therefore cannot be accessed by other hardware, including the iPad or a computer accessing a Web site.

I also dislike the sharing capabilities of the Activity app. When one tries to share the entire exercise activity to Facebook, all that is uploaded is an image from the app, and not the details of distance run, time, map, etc. One can share the map of the Activity, but that is not uploaded with any other data about the run, e.g., distance, time, etc. 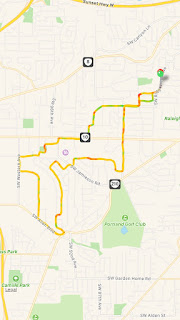 Another disappointment is that other fitness apps do not (yet) allow capture of the watch GPS data. For example, while RunKeeper and MapMyRun have Apple Watch apps, they presently do not capture the watch’s GPS data when not tethered to the phone. The SpectraRun workouts app can access and export the run data but it presently does not export the GPS data into the TCX file it generates. I assume that updates to these non-Apple apps will eventually be able to access the GPS, and this might also solve the problem of Activity app data not being exportable.

Fortunately, all of these disappointments should be easily fixable in software, and I am hopeful that Apple and other developers will remedy them quickly. I have had some online dialog with one of the running app developers, and they assured me (and others) that they are trying to quickly update their watch apps to capture the GPS directly from the watch.
Posted by William Hersh, MD at 5:12 AM No comments:

Update for a Standard Occupational Classification (SOC) Code for Informatics: Likely to Happen But Needing Revision

For years, many in the informatics field have lamented our invisibility when it comes to US government labor statistics. As I and others have been writing for years, there is no Standard Occupational Classification (SOC) code for those who work professionally in informatics [1]. As the SOC is updated by the Bureau of Labor Statistics about once a decade, I was pleased to be appointed to a group led by the Office of National Coordinator for Health IT (ONC) to submit a proposed revision to the 2018 SOC to include a code for health informatics in July 2014.

While I was pleased to see that our recommendation for the addition of a code for health informatics practitioners was accepted, myself and others were disappointed that the code lumped together three distinct groups who work professionally with IT in healthcare, namely health informatics, health information management, and health IT. A number of leading health IT organizations support the view that these are distinct. I was pleased to have the opportunities to work with my colleagues from the American Medical Informatics Association (AMIA) and a number of other organizations to draft a letter endorsing the view the there should be three Detailed Occupation codes for these three areas.

In particular, the letter led by AMIA advocates modification to the final 2018 SOC that will be released in 2017 that will split the new 29-9021 code into three new Detailed Occupations defined as follows:
The letter also suggests that, SOCPC for 11-9111 Medical and Health Services Managers to include: Clinical Informatics Director, Health Information Services Manager, and Chief Medical Information Officer. We suggest the addition of “Chief Nursing Informatics Officer” to this list to add further clarity. Experience among our constituencies indicate a proliferation of senior executives and other management-level job titles within and across these distinct occupations, all of which need to be captured under this detailed code.

I agree with AMIA and others that the occupations of health informatics, health information management, and health IT are each important yet unique within healthcare. Having them represented in the SOC separately will hopefully allow further delineation of the contributions each makes to advancing the use of information and technology in healthcare.

Posted by William Hersh, MD at 4:05 AM No comments: