Milestones for the AMIA Annual Symposium

One of my favorite events each year is the American Medical Informatics Association (AMIA) Annual Symposium. It is an excellent meeting that brings together presentation of new research, up-to-date summaries of progress in the field, and great social events.

This year marks the 30th consecutive year of my attending the Annual Symposium (which in its early days was called the Symposium on Computer Applications in Medical Care, or SCAMC). The first time I attended the event was in 1986, when I was in my last year of my internal medicine residency. The following year I started my National Library of Medicine (NLM) Postdoctoral Fellowship, the first support of a long line of NLM funding that has supported my career.

A number of AMIA meetings have been particularly memorable over the years. In 1996, I was elected to the American College of Medical Informatics (ACMI), an honorific society that recognizes expertise in biomedical Informatics. In 2005, the AMIA Symposium featured the first in-person session for the end first offering of the 10x10 (“ten by ten”) course, which would go on to become a major AMIA program to provide introductory education in informatics and also reached a new milestone described below. In 2008, I was awarded the Donald A.B. Lindberg Award for Innovation in Informatics. The meeting in 2012 was another special one, as I served as the Scientific Program Chair.

Another important aspect of the meeting for me is the showcase of scientific research and other work emanating from our biomedical and health informatics program at Oregon Health & Science University (OHSU). This year is no exception, and one thing we are particularly proud of this year is OHSU students comprising two of the four finalists for the AMIA 2015 Student Design Challenge. This year’s Student Design Challenge focus is, The Human Side of Big Data – Facilitating Human-Data Interaction. (Postscript: One of the two OHSU finalist teams took first place, the second consecutive year that an OHSU team won the Student Design Challenge!)

Below is a picture of me at this year’s Annual Symposium, enjoying myself as always, especially with this year’s plethora of ribbons everyone is attaching to their name badge. 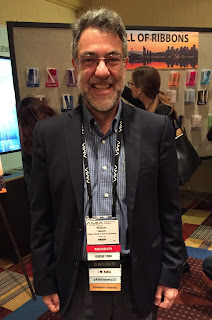 Another milestone being achieved at this year’s AMIA Annual Symposium is the surpassing of 2000 who have completed the OHSU offering of the AMIA 10x10 course. While the exact number of people completing the course will not be final until a week or two after the meeting, there will be at least 2034 people who have completed the OHSU 10x10 course since its inaugural offering in 2005. We may not have achieved “ten thousand by 2010,” but I am reminded constantly by those who taken the course that it provided an excellent path into the informatics field. My original course has been the flagship course for the program, making up 74% of those who have completed any 10x10 course. The figure below shows the distribution of those completing the different courses of the 10x10 program. 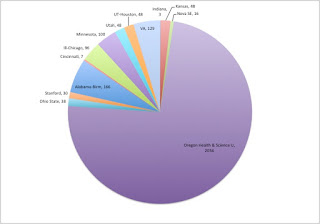 Also of note is that 312 of those completing the OHSU 10x10 offering have done so via so-called “i10x10” offerings based in other countries, which have included Singapore, Saudi Arabia, and Israel. The OHSU 10x10 course also inspired the offering of the course in Spanish from colleagues at Hospital Italiano de Buenos Aires Argentina, starting initially as a direct translation into Spanish but taking on a more Latin American focus over the years.

Because of the interdisciplinary nature of the informatics, I deal with many different academic fields, from medicine to computer science. But there is no question that my heart and home are in informatics. Each year, the AMIA Annual Symposium reaffirms that this is my discipline, and my closest professional colleagues are also among my best friends.
Posted by William Hersh, MD at 3:52 PM No comments: