For over two decades, a significant portion of my teaching at Oregon Health & Science University (OHSU) has been online, and one of the main modalities I have used is narrated lectures, in particular, voice-over-Powerpoint slides. I know that many bemoan the use of Powerpoint for any presentations, including teaching. However, I find slides a very useful way to organize information, utilize simple graphics, and develop a big picture for the knowledge I aim to convey. As I use my teaching slides for other purposes, such as giving talks, another critical need for me is to maintain the source Powerpoint files.

This makes my choice of tool(s) to create voice-over-Powerpoint files critically important in my work. Over the years, I have used different tools for doing so. My initial foray used a technology that some Internet long-timers might remember, called RealMedia. Another imperative in the early days, circa 1999, was that the files not be too large so as not to require substantial bandwidth, since those were the early days of broadband Internet, and many people were still connecting, especially from home, via telephone modems.

Another lesson learned in those early days was that learners preferred online lectures to be broken down into 15-20 minute segments. This also made recording easier, as one did not have to record an entire lecture in a single session.

Over time, there was development of new tools. RealMedia eventually fell out of favor with many users and developers, and for a while I used a now-defunct tool from Adobe called Presenter. It used an output format that was very popular for many years, Flash, which was retired a few years ago.

In 2007, I discovered another tool that served me well for a long time, Articulate Presenter. One of its key features was the ability to record a single slide at a time. All of the tools I used before then required the lecture over the whole slide deck to be recorded in a single session. Being able to record slide by slide was useful for several reasons, not the least of which was that most of my updating of curricular content involved incremental update of single slides and not the entire lecture segment. In other words, a small part of a topic might change, and by being able to update individual slides, I could update just those slides than needed it.

Another feature I valued from Articulate Presenter was being able to configure the output with a navigation and notes frame on the left, enabling individuals slides to navigate to specific slides, and for the text in the notes field of the slides to be viewed. The output was generated in Flash when it was in its heyday. and then transitioned to HTML 5 as Flash was being retired.

But there is one big limitation of Articulate Presenter, which is that it only runs on Microsoft Windows. My primary computer when I started using Articulate Presenter was a Windows PC, but in the early 2010s, I was feeling the pull to return to the Macintosh platform that I had moved away from in the mid-1990s. Part of the allure was that Apple itself was transitioning to Intel chips, meaning that Macintosh computers could run Windows and its applications.

I made the transition back to the Mac in 2012, and fairly seamlessly moved my Articulate Presenter work to running Windows on Parallels. But although the solution worked, it was somewhat clunky, and having to launch Windows to do any work in Articulate Presenter required a number of steps. Despite the protestations of myself and many other users (evidenced in their support forums), Articulate never developed a native Mac version of Presenter.

In the last couple years, of course, Apple has transitioned away from Intel chips. This is a good thing for Mac users generally, as the speed and power consumption is remarkable. And while there is supposedly a version of Windows that runs on the ARM chips that Apple is now using, it does not run most native applications, including Articulate Presenter.

Fortunately during this same time, Microsoft has been improving the slide narration capabilities, and one can now easily narrate slide by slide directly in Powerpoint. And then the output can be exported to a standard video format such as MP4 or MOV. In addition, OHSU uses the Echo 360 platform, which allows video files to be posted to a server. While the video output of Powerpoint does not have all the navigation features of Articulate Presenter, the learner can still navigate around the lecture. Echo 360 also offers automated closed-captioning, although it is far from perfect.

This transition will require me to re-record all lectures completely, but many lectures are due for that anyways. In addition, I can record in Powerpoint slide by slide. Using Powerpoint on my Mac is also much less clunky that using Articulate Presenter in Windows on a Mac. It is especially easy when I need to make a small update, such as finding and fixing a typo in a slide, and not having to launch Windows, and then Articulate Presenter.

One can see an example of the results of my new approach in the image below from a Web site that I maintain, What is Biomedical and Health Informatics? I have maintained this site for many years, both as a way to introduce the world to my view of the field of informatics and also a showcase for the online learning modalities that our program uses. The site also has a great domain name I was able to snag when .health was made a top-level domain, http://informatics.health/. I have redone the lectures on this site using my new approach. 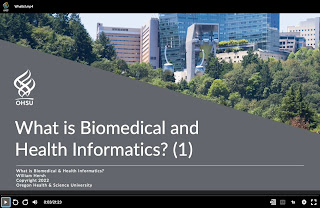 Certainly a bottom line is that the ease of updating lectures far outweigh the small additional features provided by Articulate Presenter. It may seem somewhat ironic that improvements in Microsoft Powerpoint now give me the ability to move on from Microsoft Windows and Articulate Presenter. But I am pleased that I can now can evolve with Apple as it innovates its hardware and software with its new ARM chips.

Posted by William Hersh, MD at 5:29 AM No comments: