One of the most enjoyable and impactful activities of my career has been the 10x10 ("ten by ten") course, which is an online introductory course in biomedical and health informatics that I teach in partnership with the American Medical Informatics Association (AMIA). The course recently reached a new milestone, surpassing 3000 people completing the course since its inception in 2005. My course from Oregon Health & Science University (OHSU) was the original and is the largest course of the AMIA 10x10 Program.

The OHSU 10x10 course provides an up-to-date detailed introductory overview of biomedical and health informatics. The content delivery is online, followed by an optional in-person session, typically at an AMIA meeting, at its conclusion. About 10-15% of those completing the course take the optional final exam and pursue further study in the field, usually but not exclusively at OHSU.

The 10x10 program gets its name from the program's original goal in 2005 to train 10,000 people in biomedical and health informatics by the year 2010. The goal for 10,000 people came from a stated need by then-President of AMIA Dr. Charles Safran that there should be at least one physician and one nurse trained in informatics in each of the approximately 6000 hospitals in the US. I adapted an already-existing online introductory informatics course and we set the goal of 10,000 people completing the course by 2010, leading me to devise the moniker, 10x10. Even though 10,000 people did not come forward to take the course by 2010, about 1000 people did complete the OHSU offering by 2010.
After 2010, the 10x10 program continued to attract enrollment. The positive feedback of those completing the course has always been gratifying. Now, a new milestone has been reached with the cohort who recently completed the course, surpassing a total of 3000 individuals having completed the OHSU 10x10 course since 2005. A total of 111 offerings of the OHSU course have been provided since that time. While most of the course enrollment has come from the US, several international organizations have partnered to offer the course based in their countries, including Gateway Consulting (Singapore), King Saud University (Saudi Arabia), the Ministry of Health (Israel), and Abu Dhabi Health Services (SEHA, United Arab Emirates). There have also been partnerships to offer the course with domestic organizations in the US, including the American College of Emergency Physicians, the Academy of Nutrition and Dietetics (AND), the New York State Academy of Family Practice, the Mayo Clinic, the Centers for Disease Control and Prevention, and others. The table below shows the course partners, the number of offerings with them, and the number of people completing the course. 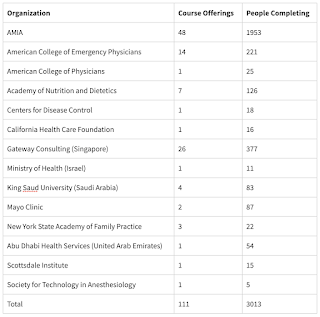 The figure below shows the enrollment by year. The largest amount of enrollment came during the heyday of the "meaningful use" era in the early 2010s, dipped somewhat later in the decade, but has continued strong since then. 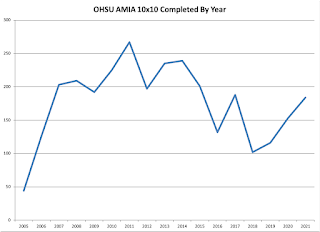 Due to the online delivery of the course, it had no trouble continuing during the COVID-19 pandemic, although the in-person sessions at the end of the course were transitioned to virtual delivery. With the receding of the pandemic, those sessions have returned now to an in-person format. Of course, the content of the course was affected by the pandemic and its impacts on the field. However, the more fundamental topics of the field, including electronic health records, standards and interoperability, machine learning and artificial intelligence, and others have still been covered in a comprehensive and up-to-date manner.
The course will continue to be offered beyond this milestone, and in fact a new offering is beginning this month. In-person sessions for those completing the course will take place at upcoming AMIA meetings this year, including the Clinical Informatics Conference (Houston, TX - May 23-26) and the Annual Symposium (Washington, DC - November 5-9).
As the OHSU agreement with AMIA is non-mutually-exclusive (i.e., AMIA can offer other 10x10 courses and OHSU can use the course materials in other courses), the content of the OHSU 10x10 course has been delivered to students under other course names. The other major use of the content is in the course, BMI 510/610, which is the introductory course in the Health & Clinical Informatics Major of the OHSU Biomedical Informatics Graduate Program. This course has been offered since the OHSU graduate program was launched in 1996 and every academic quarter since 2000. After the most recent academic term, 1598 people have completed this instance of the course.
The course content was also converted into a virtual two-week block course for medical students at the onset of the pandemic. The course was made available to medical students within and outside OHSU, with 44 OHSU medical students participating in three offerings and 178 medical students from outside OHSU participating in eight offerings during 2020. This block course continues to be offered to OHSU medical students.
Other offerings of the course have been provided to health systems, including Kaiser Permanente Northwest, Providence Health and Systems, and Bangkok (Thailand) Hospital. The course has also been offered to H3ABioNet, the Pan African Bioinformatics Network for the Human Heredity and Health in Africa (H3Africa) consortium, of which I serve on the Scientific Advisory Board.
The course  also inspired federal legislation in the US, leading to the 10,000 Trained by 2010 Act, introduced by Rep. David Wu (D-OR). The bill was passed by the US House in the 111th Congress (2009-2010), and elements of it were incorporated into the HITECH Act. The HITECH program included funding for Health IT Workforce Development, including grants awarded to OHSU.
Probably the most gratifying aspect of the course is the feedback I get from students who appreciate the broad but sufficiently deep content, i.e., getting the big picture while also learning the rationale behind it. I enjoy keeping in touch with those who have taken the course, especially when I run into them in airports, at conferences, or other places. I also value the motivation that the course provides to me in keeping up with advances across the entire field of biomedical and health informatics.
Posted by William Hersh, MD at 5:03 AM